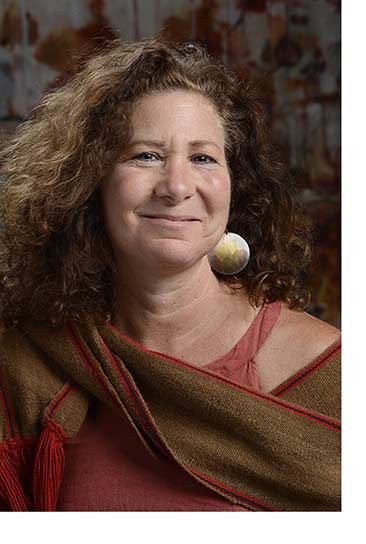 Debra Stuckgold is an interdisciplinary artist and educator, focusing on the interconnection between human beings, their place of origin, and the changing landscape. For more than two decades, she has been creating site-specific installations that transform public and private spaces using a range of visual media that address geo-political themes. Her collaborative projects with children, young adults, and refugees focus on the transformative impact that collective art making brings to individuals and communities.

The relationship between heritage and ancestral lands is a theme ingrained in Debra’s family legacy. Her paternal relatives dispersed across five continents at the onset of World War II, fracturing ties and reshaping their identity as part of the Jewish diaspora. At the age of 14, her family relocated to Brazil. Exposure to the rich traditions of Afro-Brazilian art, music and dance heightened her awareness of the collective legacies that shape and leave their imprint on diasporic communities.

In multi-layered print series, Debra depicts the landscape as a vessel of history, linking past and present. Blueprints, maps and altered floor plans are transferred to layers of transparent mylar that are suspended like stratified terra, evoking the instability of natural and political boundaries. In “The Country Between Us,” she probes the Israel/Palestine divide, re-contextualizing a title from the poetry of Carolyn Forché to consider divergent narratives in the Middle East. A 20-foot’ wall-drawing of a dissected map is cut and reassembled. Territorial claims are transgressed and re-negotiated — shifting perceptions of temporality, impermanence and belonging.

Culturally attuned pedagogy distinguishes Debra’s arts education programs at public, charter and independent schools, and community college. A founding teacher at Learning Without Limits in the diverse Fruitvale neighborhood of East Oakland, she guided the school’s art program for nearly a decade and trained K-12 teachers to integrate the arts across their academic curriculum. A commitment to expanding opportunities outside of traditional art settings led to an immersive three-year training with dance and expressive arts pioneers Anna and Daria Halprin. Drawing on the struggles of displaced communities, participants give voice to their personal and collective experience in projects ranging from a refugee women’s mural series to mask-making with students in the West Bank.

Debra holds a BA in Drawing/Painting, a certificate in Art Education, an MFA in Painting and Printmaking, and certification as an Expressive Arts facilitator. She has received grants, awards and recognition from the Puffin Foundation, the Marcus Foster Fund, Target Foundation, Washington State Arts Commission, Virginia Arts Commission, and the Creative Capacity Fund, among others. Debra has completed residencies at the Vermont Studio Center, Stonehouse Center for Contemporary Arts, Centrum, the Santa Fe Art Institute, and the Julia and David White Artist’s Colony. She was a featured artist in the anthologies, The Cold Wax Book and Nature inspired. She makes her home in the San Francisco Bay Area.